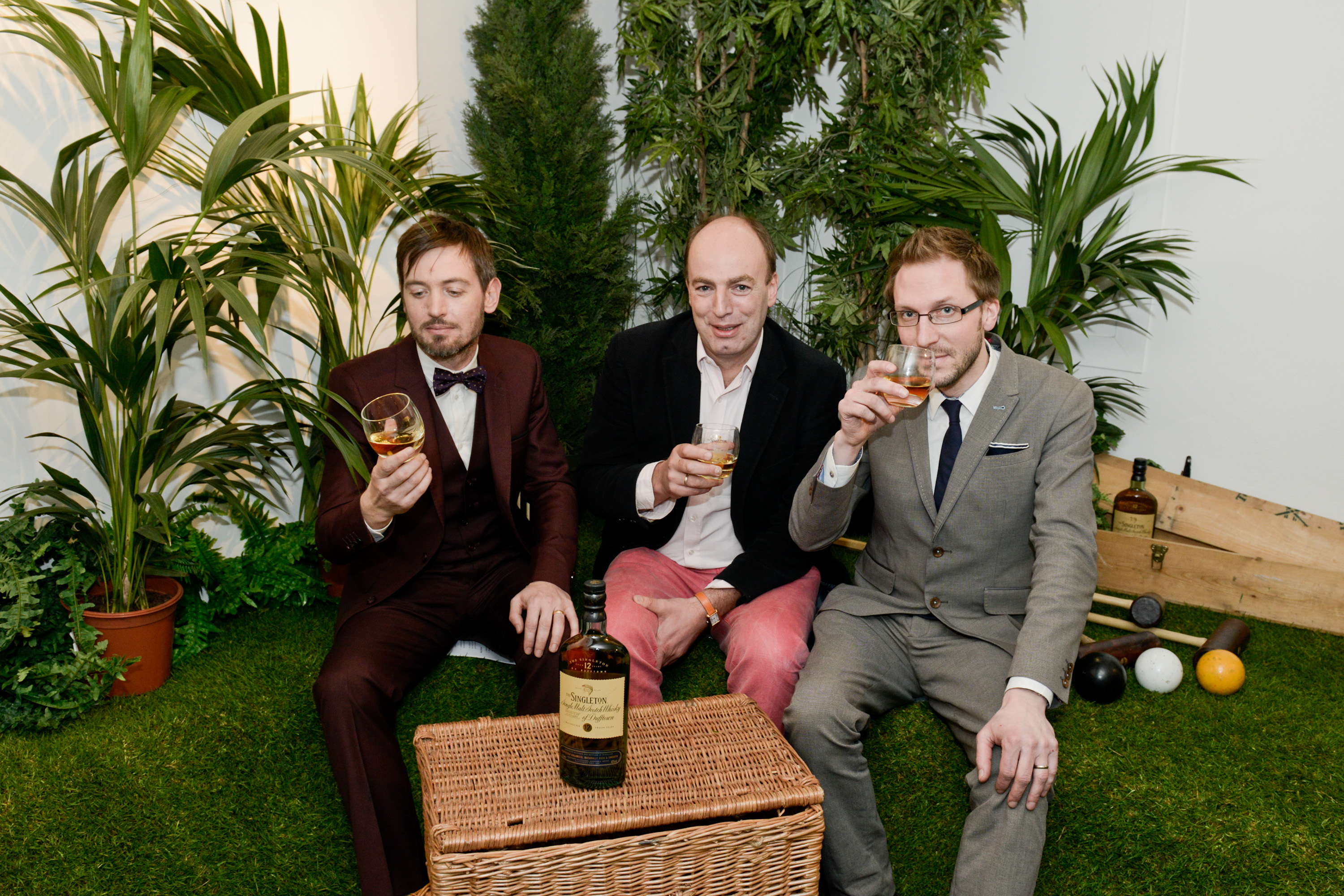 “ Martine Nouet has shown an interest in this article which has been offered for publication elsewhere. Many thanks to her for allowing this report to be published here. It seems to be an ongoing story”. Martin Mitchell . Getting to grips (above) with the research are Professor Charles Spence (centre) with Scott King and Russ Jones of Condiment Junkie.

Towards the end of March, the Singleton Sensorium, described as “the world’s first multi-sensory bar”, arrived for a temporary stay at the fashionable Riflemaker Gallery in Soho, London. About 400 volunteers, over 3 nights, sipped “Singleton of Dufftown 12 year old” in three different environments assisting in the completion of a scientific study; “Tasting Notes: assessing the effect of the multisensory atmosphere and ambiance on people’s perception of whisky”. This is being written by Charles Spence, Head of Cross Modal Experimental Psychology at Oxford University. It will be presented to a peer review journal and is due to be published in September 2013.

Just a couple of hundred metres away from the Riflemaker Gallery denizens of  London’s illustrious St James’ clubs would have been enjoying a pre or post prandial dram of fine whisky in an equally salubrious but more traditional environment for a single malt. While in fashionable Soho, Singleton’s Dufftown 12 year old  was being louche and libertarian.

Scott King and Russ Jones of Condiment Junkie – an organisation describing itself as an “experiential sound design company” – have collaborated with multiple Michelin starred restaurateur Heston Blumenthal on the sound for his now famous Fat Duck dishes: Sounds of the Sea and The Mad Hatter’s Tea Party. Through Blumenthal they met Charles Spence, who according to his Oxford University profile, among his many other outstanding achievements in psychology, has “won an Ig-Nobel prize for nutrition for his groundbreaking work on the sonic crisp!” This being a prize for “improbable research that might make you think”.

This creatively combustible assemblage of art, marketing and science had its eyes on working with whisky in a “Sensorium” because according to Scott King from Condiment Junkie, “ Whisky is stable compared to, say, wine which is a very tricky variable subject and changes from bottle to bottle”. The object of the Sensorium being to experience the changes in taste of one very discernible and  consistent product through different environments.

These environments very obviously reflected some originally conceived consensus features of the Singleton whisky on nose, taste and finish and the three rooms were slightly predictably built around grassy, sweet and woody. Yet such was the imagination of each room that there was a definable and undeniable taste shift as one progressed through each visual and audible atmospheric note. For me the red “sweet” room lacked only Dali’s Mae West’s Lips Sofa which I would have happily collapsed onto had it been available. Make of that what you will Professor Spence!

Diageo’s , Single Malts Whisky Global Marketing Director Nik Keane, met up with Scott King at a key moment in the Singleton Sensorium project, explaining to him that with whisky, his concerns in 2013 are what will happen in 2025 and what is going into the cask now will emerge, probably, into very different market conditions 12 years hence. Condiment Junkie anticipates, particularly in the latest and the emerging markets, various cultural demands. Bespoke booths within bars and restaurants where someone could entertain with a specific brand or bottling is well within reason he believes. Therefore could this be influential in what happens in the distilleries? Those sacred places where the fusion of  tradition, science and nature are blended into pure liquid gold. That’s the   beautiful alchemy that is so appreciated by traditionalists.

Despite the intervention of some very smart people into the way you might enjoy your dram in the future, the consumer’s individual responses and enjoyment will remain immovable,  influential and ultimately critical hopefully. Spence’s findings will be interesting to read as each visitor to the event was asked to rate the impact of taste, nose and finish, in each room. And it must be added that there didn’t appear to be any lofty experts present!

Martine Nouet, one of the world’s leading independent whisky tasters has long been a pioneer in using her nose and palate for various imaginative single malt whisky fusions and in 2011 she wrote about it as a Chemical Romance. More recently she hosted the very successful Spirit of Art event staged by Whisky Exchange which was reported in Whisky Magazine, January/February 2013.  Her events have been viscerally driven but have been guided, arguably subliminally, by multi-sensory perceptions and she along with many other people in the whisky trade might be very interested in the outcome of the Singleton Sensorium research which will shortly emerge from  Professor Spence’s Cross Modal Research Laboratory at the Department of Experimental Psychology at the University of Oxford.

The gentlemen in those nearby St James’ clubs exist in their very own “Sensorium” of fading cigar smoke, handsomely cracked leather arm chairs and a sense of history but in Soho’s Singleton Sensorium something else was stirring the senses and a very largely different age group was being stirred.