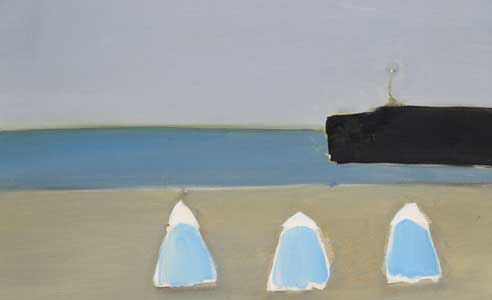 Refusing to be labelled as an abstract painter nor more than a figurative one, Nicolas de Staël tracked color and light all his life through. His paintings throb with emotion through a very personal use of colours (red, yellow, green for “Lumières du Sud and an incredible array of blues and greys for “Lumières du Nord) and the texture of the paint. He said: “You never paint what you see or think you see. You paint with a thousand vibrations the blow that has struck you: how can you be struck and not cry out in anger?

Touring Morocco at the age of 22 into the steps of Delacroix, he tells his adoptive mother in a letter: “I know my life will be a perpetual sailing on a sea of uncertainty”. Nicolas de Staël achieved something unique: on the canvas, colour gives shape to volumes. A tormented and restless soul, the “thunderstruck prince” as a biographer called him locked himself in total solitude to grab that elusive light, which he found and magnified in his paintings. Alas, he missed that inner light which would have carried him along an uncompromising path. And abruptly killed himself on that night of the 16th of March, leaving an 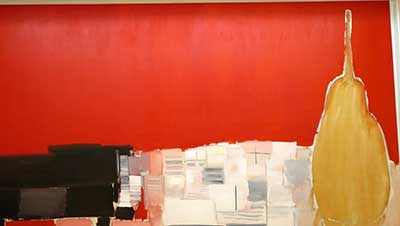 Absolutely thrilled by these two exhibitions, I could not help but thinking of the way the profile of a whisky builds itself through its aromatic expression, the different notes conveying vibrations and emotions and achieving an image. Flavours convey colours as well and vice-versa. A new sensory path to explore for me.

Yes Thanks, No Please

The media, whether they are social or not, stir minds up for the 18th September, a big day for Scotland and the rest of UK. As a resident in Scotland, I am invited to vote for the referendum. I still find it awkward that foreigners living in Scotland can vote while Scots living abroad cannot. But leaving my embarrassment aside, I will go and vote as this is also a way of showing I am deeply rooted in the place I have chosen to live in.

I won’t discuss the content of the question here but the form raises interrogations.

We are asked to choose between “yes, please” and no, thanks”. It seems that a simple yes or no lacks politeness for a British. Indeed, when you are offered a second cup of tea, the right way to reply is “yes, please” if you care for more or “no, thanks” if you had had enough.

But answering a serious question such as “should Scotland become independent” simply does not work for me with this wording.

Is it just a misunderstanding due to English not being my native language but in “yes please”, I see a subliminal relation of subordination, as if one was in the situation of asking for permission to say yes.

While in “No, thanks”, I catch a hint of contempt: no thanks, not that disaster, my goodness!

Again, it may be a misinterpretation of idiomatic expressions. Was not I asked by an angry independent bottler, some time ago, to go to university to study English rather than providing tasting-notes to Whisky Magazine? Meanwhile, I noticed two spelling mistakes and the misuse of an adjective by this very same person in his short email. He also proved he did not know me when he argued that I must have had my mouth full of garlic when I tasted his unquestionably perfect dram!

Anyway I am thrown into this Manichean debate, not easy when you are a Norman. We are laughed at our way of not taking a position, famous for our “p’êt ben qu’oui, p’têt ben qu’non” (maybe yes, maybe no). Of course this is a cliché and we are NOT like that at all!

My friend Martin Mitchell, a born writer, has decided to share his introspective thoughts with you and I. He casts a sharp and learned look on news, literature and just life. Worth looking at: www.therusticant.uk