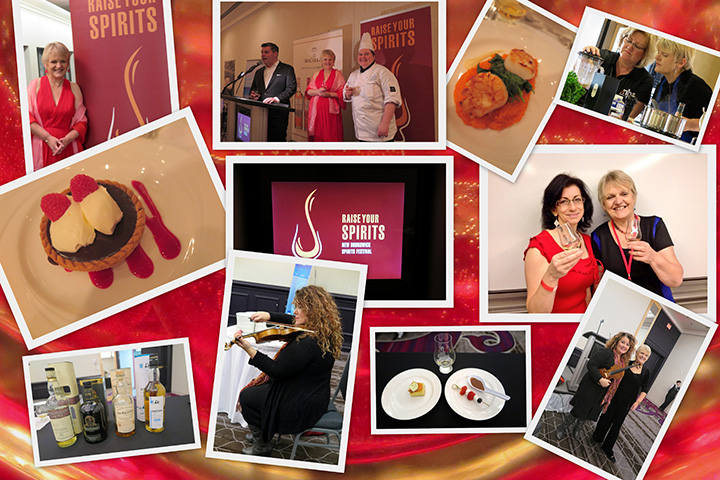 My annual trip to Canada takes me to Fredericton in New-Brunswick, the only officially bilingual province, part of the Atlantic Provinces (les Provinces Maritimes). Fredericton, the capital, is a quiet and spacious city which bubbles with excitement on the third week-end of November. Whisky lovers come from Ontario, Québec, US to attend the festival. The stalls and the NB liquor shop (installed within the festival for a night) display whiskies that cannot be found anywhere else in Canada. The shop cashes the amazing amount of $165 000 in three hours! There is definitively something happening there!

Would Verdi have agreed with me? I thought that the drinking song from la Traviata was appropriate as an “ouverture” for presenting Macallan, Highland Park, Laphroaig, Cutty Sark Prohibition and Basil Hayden, all whiskies distributed in Canada by Mer et Soleil company. I was told I took a risk by starting the meal with the highest strength and most powerful whiskies. I certainly did but it worked. I don’t consider there is a rule in this matter just like with wines. Keeping the oldest and most complex wines for the end of the meal generally served with cheese is not always the best option. I only consider the pairing, the couple food and whisky form together.

We started the meal with a tasty salad featuring curried shrimps and a mango salsa. Cutty Sark Prohibition (50%) was amazingly sweet and smooth with the dish, which enhanced its citrus and vanilla notes.

Following, Laphroaig Cardeas 2014 (51,4%) did not feel spirity at all with the scallops and carrot purée. Funny how root vegetables can tame alcohol. They revealed its medicinal character and played a contrast with the Amontillado dryness.

A comforting traditional dish, Flemish carbonade (stewed beef in a gingerbread and vinegar sauce), was accompanied by the elegant and velvety Macallan Sienna. They both sung a kind of Christmas carol!

I chose the rye heart of Basil Hayden Small Batch Bourbon to pair with the cheeses, a gouda and a cheddar served with a rye bread and apples. What a winning combination.

Chocolate was a must for the exquisite Highland Park 18 Year Old, which reminded me of dear Michael Jackson. We toasted our late friend with the dram.

What a fantastic trio!  For the third year, delightful fiddler Krista Touesnard from Cape Breton (Nova Scotia) infused my class with emotion when she played a perfectly selected tune to each season.

For instance we got the dark, earthy tones of Bunnahabhain 18 Year Old when she played that heartbreaking lament for Autumn (pardon, Fall!).I could see the snowflakes swirling around the mineral dryness of Caol Ila 13 Year Old (Gordon & MacPhail) when I listened to the soft rhythm of the winter tune.

As for the food and whisky pairing, a savoury and a sweet nibble were offered with each whisky.

Spring  anCnoc 16 Year Old with raw salmon on a little square piece of brioche; a brochette of red fruit, a dice of marshmallow and milk chocolate sauce

Autumn  Bunnahabhain 18 Year Old with a piece of cheddar and sauteed mushrooms on a small pizza; gingerbread, orange segment and grated dark chocolate.

Winter  Caol Ila 2001 Connaisseur’s choice (Gordon & MacPhail’s) with a sardine in oil and a black olive on a slice of cooked potato; ginger and apple crumble.

When a brunette contradicts a blonde 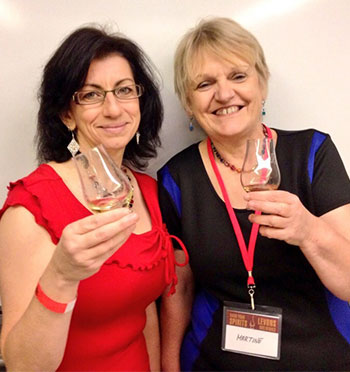 … the atmosphere is electric! Johanne Mcinnis, the smart “whisky lassie” who does not seem to have enough with a blog and 3000 followers to quench her thirst for sharing her whisky discoveries, took up the challenge. We decided to focus on the importance of maturation by confronting each other on the friendly ring of a class.

I praised bourbon cask matured whiskies while she extolled the virtues of sherried whiskies. The interesting point is that we presented the whiskies blind, just saying which region they came from. Except that, carried away by the impressions my nose got above a glass of Bowmore Small Batch, I started describing Bowmore pier on a cold frosty morning. A typical blonde moment! Bowmore Darkest was not tasted blind, obviously!

Balvenie Single Barrel against Balvenie Sherry Barrel ? We were not looking for electing a winner but we just wanted to emphasize the role of the cask. Nevertheless, I regret that Balvenie has replaced the single Barrel by Single Butt. Why not keep both? It is such an educational offer. Glenrothes Alba is miles away from Glenrothes Robur.  Hence the interest of the demonstration. That was a light but serious way to end the festival. Thank you Johanne for your perky performance. “T’es bien fine” as we say in Québec. 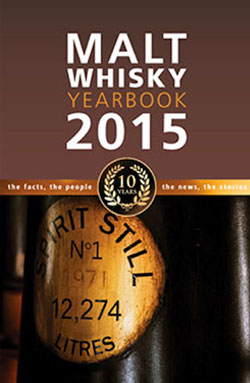 Published by Swedish author Ingvar Ronde with contribution of whisky writers from different horizons, this book is a mine of information on distilleries, whiskies and key figures of the whisky industry. My favorite among the various whisky guides.

In your Christmas stocking!