My Asian trip was so intense and busy that I was still ”dreaming in Chinese” ten days after my return! I had a wonderful culinary experience, meeting Chinese chefs, tastings all sorts of dishes, being invited to sample extraordinary teas by a Tea Master in Taipei…But I was also shocked to see so many baby-doll models in front of the stalls at Whisky Live. I can’t stand seeing women treated as sex objects. Hence my rant. Waiting for your comments…

In my food and whisky pairing exercises, I usually work with single malts which I find easier to match because of their “straight in the face” aromatic profile. Blended whiskies are… blended, hence the key aromas are more difficult to isolate. In Shanghaï as well as in Taipei, I met a double if not a triple challenge: I had a selection of blended whiskies including some mature whiskies, a few of them showing a strong sherry influence. And seafood was the theme! Not the easiest combination. It took some time and a good brain twisting to come up with interesting solutions.

Smoked salmon and Chivas 18? It can work provided a “bridge” brings them together. I will add orange grated zest, a drop of honey and toasted nuts to the cream cheese under the salmon.
Royal Salute 21 and roasted langoustine? Yes if it is marinated with lime and fresh grated ginger and presented on a skewer with a dice of roasted pineapple. By contrast, Ballantine’s 17 was just perfect with a raw oyster. It tasted smoky and salty. 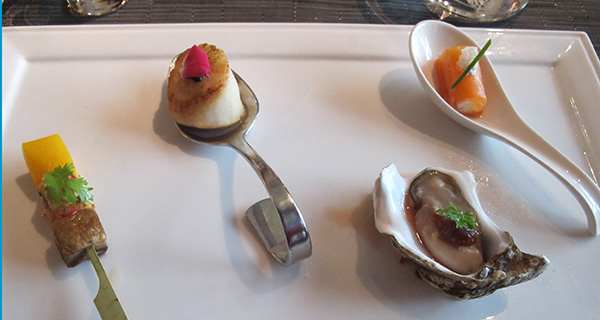 When paired with Johnnie Walker Gold in Taipei, the superb Loch Fyne langoustines needed something else because of the earthy and oaky note in the whisky. I suggested pan-fried mushrooms, vanilla seeds and a hint of chilli.

I am always fascinated by the different combinations you get with the same base ingredients, just by changing one secondary element. To get well adjusted matchings, it is important to use the largest aromatic seasoning possible. Especially when working with Chinese gastronomy. There is such a broad range of flavours in Chinese cuisine. But and this was not the slightest obstacle, I banned one key ingredient from the pairings: garlic. Really heartbreaking for the chefs who use it as widely as salt and pepper. That probably did not make me popular in the kitchen! But i will never know if I was called some bird names in the back! 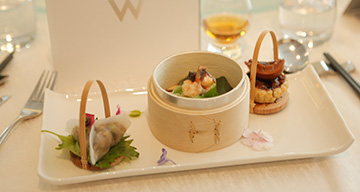 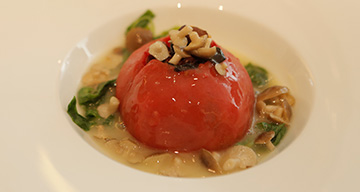 The W in Taipei produced an exquisite Chinese lunch for the Whisky Live press lunch. Exquisite presentation, sophisticated cooking, excellent connivance with the whiskies. For the starter, the dim sum trio offered an incredible array of flavours to tease the Famous Grouse 18 Year Old. The mushroom one retained an earthy flavour which found the perfect match with the sherry profile of the whisky. The most amazing dish was probably the stuffed beefsteak tomato with ginkgo, white fungus and mushrooms. Instead of a sauce to accompany this vegetarian association, the chef had chosen to pour a ladle of a concentrated chicken broth in the plate. An incredible matching with Highland Park 18 Year Old. I still have the memory of the flavours! 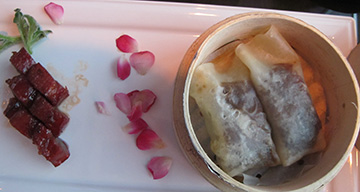 It was not easy to find the ideal dish with Macallan Gran Reserva 12 Year Old, a particularly muscular sherry Macallan especially bottled for Taipei Market. What a “Big Mac”! I could only think of duck and the chef added honey glazed BBQ pork, which gave the winning combination. The flavours were so intense on both solid and liquid side that you could not eat anything else after. A culinary earthquake !

My Asian trip was mind expanding and revealing. I loved my Shanghaï and Taipei experiences. A little caveat below.

It started at Shanghaï Whisky Live. Every single stall displayed one or more young, pretty, skinny girl. At the edge with a bottle in hand, stood those model-like baby dolls. All had the same conventional smile (more often a constrained look) and they stood motionless, during the whole show, only livening up when asked to pose for a photo. Judging by the length of their dresses and the depth of their cleavage, the brands who hired them had saved on the fabric! 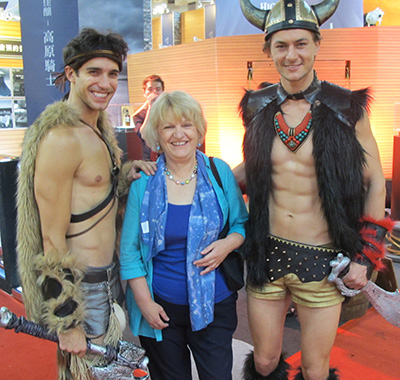 It got even worse at Taipei. The Shangaï bimbos were duplicated, multiplied. Everywhere. They were obviously not endowed with speech which reminds me of the French saying “Sois belle et tais-toi”. Enough to hurt my feminist feelings. How can displaying women as a sex object help to the understanding and appreciation of whisky? To me and hopefully to most whisky lovers (I am a hopeless optimist), it just does the opposite. I walked away from the stalls. The Grouse is famous enough without needed to be held by a wax doll.
They were not at Whisky Live Taipei but all that reminded me of a “promotion” often featured in European whisky shows with plaited pretty girls wearing shorts and pushing a wheelbarrow full of peat. That does not make the single malt smokier. The attraction is somewhere else: in the glass! Worse, there is something unhealthy in these childlike model farmers. Voilà!
Don’t think I wish a display of men as a sex object in return. The Highland Park “Vikings” looked more like bodybuilders than “male bimbos”! 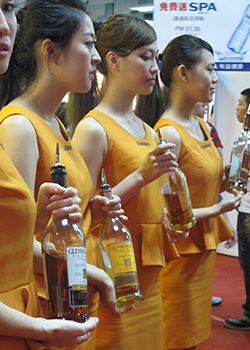 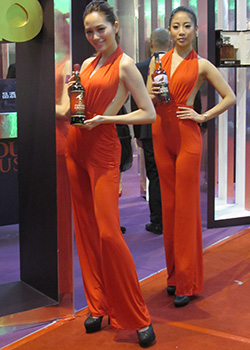 When in Hong-Kong, I was invited to one of the best Chinese gastronomy restaurants where I met Lau Chi Sun, founder and chief Editor of Wine Now. A charming and knowledgeable gentleman who confesses a fondness for heavily sherried malts. The 1974 Glen Grant from Berry’s Own selection made his day. We paired it with the delicious dishes chosen by Lau Chi Sun. I struggled hard with my chop sticks throughout the meal and the disaster came to a climax with the sweet. I or rather Lau Chi had ordered caramelized apples which looked scrumptious. But when I tried to seize one with my chop sticks, it flew up in the air and fell down on the luxurious silk carpet to the utter embarrassment of waiters…and to mine! “That happens to me all the time”, said Lau Chi with a knowing smile.

4 thoughts on “My Asian trip, my wee rant and my faux pas…”