This is the story of a painting which was intended to me and I did not know! That will remain as the best memory of my tasting tours in 2013. This happened during the NB Spirit Festival in Fredericton (New-Brunswick) late November. I was hosting an Art and Whisky tasting for the first time. Four local artists were to paint each one of the whiskies I was describing to the audience. They only had 10 to 15 minutes to perform their art, starting from a blank canvas. 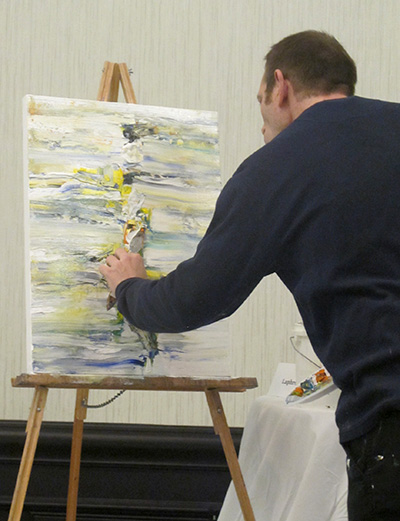 Four artists, four whiskies. It was decided to auction the paintings after the tasting to reward the artists for their work. A first to all of them and a first for the audience. So we were all a bit stressed.

The four artists created beautiful paintings, maybe not all of them suiting the aromatic profile of the whiskies but it was a first and also there is always a part of personal interpretation.

I was immediately charmed by the Laphroaig portrait in which I could read the elements raging, waves against wind and meeting as a backbone in the middle where peat and malt collided in an explosion of colours. Dana used the phrase “totem to the sea”.

I was so carried away I started to bid for the painting. I was not the only one unfortunately and I had to withdraw as the figure was swelling. I was quite pleased anyway to notice the painting would go to a charming lady who loves her whiskies. But suddenly someone put his hands up. Mr Saravana, a keen whisky lover who comes every year from Halifax to the festival mades a higher bid and got the painting. I was even happier for the artist as well as for the bidder. 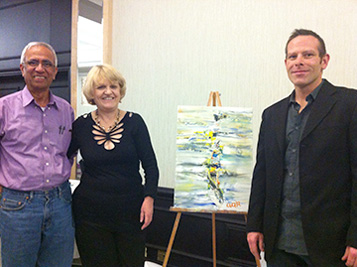 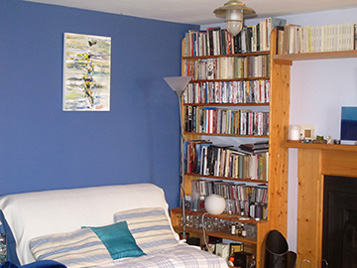 And there came the surprise! Mr Saravana stood up, came towards me and said: “this is for you Martine, to thank you for bringing us your passion and your knowledge”.  I was speechless (quite a record for me) and could feel tears into my eyes. What an emotional moment!

This is the most rewarding accolade I have had in my Queen of the Still career! I am so touched by this generous mark of appreciation that I had to tell it. My friend Frank Scott posted the painting in January. And here it is, now illuminating my living-room. Laphroaig is back to its homeland.

I am never tired of admiring that painting and telling friends that beautiful tale.

3 thoughts on “Laphroaig Comes Back Home As a Painting”