Martine & Jean Donnay, owners of Glann ar Mor distillery in Brittany, have revealed the plans for their second distillery, to be built on Islay, off the west coast of Scotland. Gartbreck will be the ninth distillery on the island. 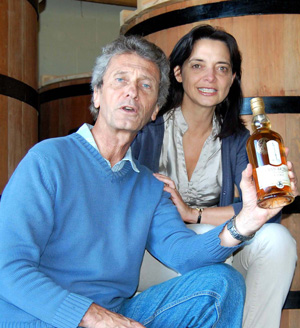 The realism of the photo can easily make one think that the distillery is already producing! The 3D scale model is so well integrated into the real landscape. We will have to wait until September 2015 though to see the new spirit run from the stills.

Will I see the smoke of Gartbreck kilns from my window? Maybe… The new distillery will be built on the other side of Loch Indaal, a few miles from Islay “capital”, ie Bowmore.  Gartbreck farm remotely lies in a perfect surrounding, looking on to the sea and enjoying spectacular views.

The plans recently revealed by Jean Donnay are exciting. Gartbreck will be erected on the model of Glann ar Mor distillery which produces an excellent unpeated malt and a non less delicious peated one (Kornog).

The whisky will be distilled according to the traditional method: two direct fired stills, worm tub condensers, washbacks in Oregon pine. 20% of the barley needed will be malted on the site in a traditional kiln.

The plan is to use local barley grown on the island. The water will be brought by gravity from Grunnd Loch, 900m away from the farm.

Once it will be operating at nominal capacity, the distillery will be producing 55.000 LPA per year of a heavily peated malt.

A very exciting adventure fired by talent and passion. Jean Donnay has just been named “Distillery Manager of the Year 2014” at the “Icons of Whisky – Rest of the World” for his distillery in Brittany. And his whiskies have won various awards in 2013 and 2014.

Oscar revisits the Singleton of Dufftown

The guests of Groningen Whisky Festival whisky dinner were welcomed with an excellent  cocktail at Hotel Prinsenhof in Groningen. The young barman Oscar has created the “A la Oscar cocktail” with The Singleton of Dufftown 12 years old. That Speyside single malt is nutty and fruity with soft notes of red fruit and poached pears.

Oscar chose to marry it with Crème de cassis and cider from Normandy. A perfect matching and a beautiful appetizing colour. As the host for the dinner, I specially appreciated the French touch in this cocktail. Though Oscar ignored where I was from when he created his cocktail!

I paired it with apples and black pudding. The chef produced a delicious amuse-bouche made of black pudding purée, apple compote and fried smoked celeriac.

Oscar kindly offers us the recipe. Try it, you will love it.

I will comment on the dinner in the next update.